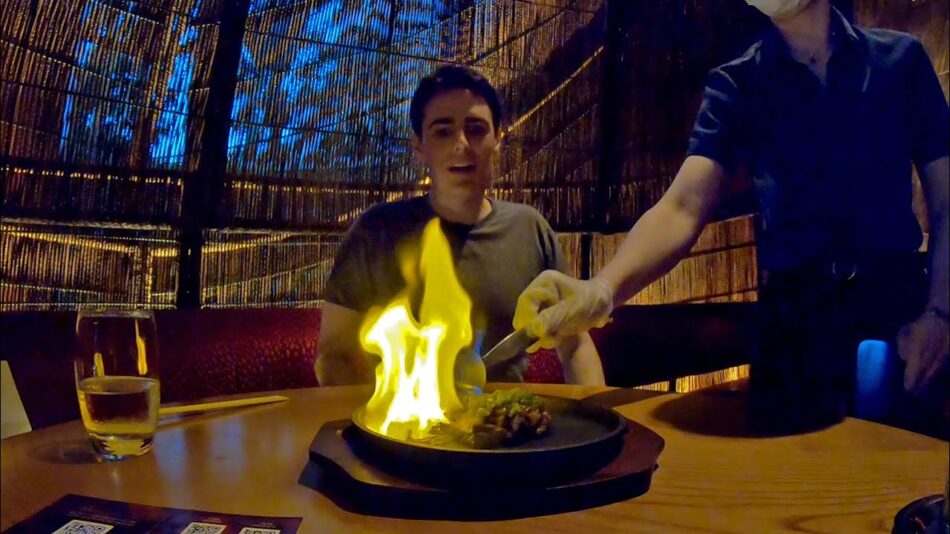 One of my favourite experiences of staying at Atlantis in the Bahamas was dinner at Nobu. Staying in Atlantis in Dubai I decided to recreate the experience, except rather than with a group of friends, I took you guys!

Nobu is a Japanese-Peruvian fusion restaurant chain started by a guy called Nobu who had a hit independent restaurant in Beverley Hills that was popular with celebrities and then expanded into different cities by partnering with Robert De Niro.

As you can imagine, it's not cheap place to eat but I feel like it's worth treating yourself to a meal in a place like this every so often, especially when you're staying somewhere like Atlantis, it's all part of the experience.

I was the first one to enter the restaurant when they opened at 6 pm. I don't usually eat dinner this early but as I planned to vlog the experience I thought I would make life easier on myself. A quiet restaurant with fewer other diners is less embarrassing to vlog in and knowing how bad the GoPro is in low light, I planned to make full use of Dubai's last hour of daylight. Sunset right now is around 7 pm.

I was welcomed into the restaurant with a shout of "Irasshaimase!", which you will hear when you enter most Japanese restaurants, a greeting to welcome you and alert the other staff that there's a new guest has entered.

As part of the precautions relating to the 'rona there were no physical menus on the table but instead a card with QR codes on it. I wasn't prepared for that. I never use QR codes for anything and my phone wasn't set up for it. Thankfully, the waitress seeing my frustration made life easier by giving me an actual physical menu which is disposable.

I've since figured out how to get QR codes working on my phone but I would still rather have a physical menu to look at in these restaurants. I think having to pull your phone out and zoom in and out on your screen takes away from the dining experience.

At Nobu in the Bahamas I had tried the Omakase. Omakase is Japanese for "entrust" or "I'll leave it up to you" and is the name they give to the Chef's tasting menu, six courses of Nobu's most popular dishes.

At Nobu Dubai they have a special Dubai tasting menu with dishes that are popular or were invented in the Dubai location, with some more premium dishes including Wagyu Beef. That's what I went for but customised for me with the famous Black Cod Miso from the signature Nobu tasting menu replacing the Chilean Sea Bass on the Dubai one.

From those 7 courses my favourite was the Black Cod Miso again. I can't describe how delicious it is so you must try it for yourself at least once in your life.

My 2nd favourite was the Crispy Shiitake Salad. I wouldn't have imagined a mushroom salad could taste so good. It's a dish that was invited by the head chef of the Dubai restaurant and is made from flash-fried shiitake mushrooms and covered in truffle oil. The texture is like eating very thin nachos and has a very intense savoury flavour.

The total bill would have been 750 AED (just over $200) but I took advantage of a current promotion to knock 30% off that. Basically everywhere has such promotions right now as business try to entice customers back after the lockdowns so this is a great time to indulge.

I'm not sure if I'd attempt to vlog in such a place again. This kind of restaurant always has low light and play copyrighted music so it's a bit of a challenge. I did my best to edit out most of the music but as for the low light, it made for some terrible footage but hey, amateur vloggers gonna vlog amateurishly.

A professional vlogger would have brought an LED light and diffuser but who wants to sit and eat dinner in a fancy restaurant with a spotlight on them? I prefer to vlog as discreetly as I can for a number of reasons and refuse to even attach a shotgun mic to my low profile GoPro.

The perfect solution for me vlogging in fancy Dubai restaurants it seems would be to do it during Ramadan when no music is being played and do it at lunchtime rather than dinner. I'll bear that in mind for the future.

💗 Help the channel grow by liking, commenting and subscribing. If you want to be extra nice please share my video with your friends on social media.